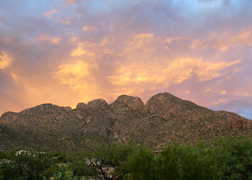 The bloom of the tricocereus is exquisite, but fleeting. This cactus is so stunning that you put it in your garden where it will stand out. Where you should plant it, however, is where you would normally fall over it on any given day. I use the word "day" with purpose because the bloom will unfold and disappear in a single day. If you miss it, well, you missed it. If you are lucky, the plant will have more than a single bloom and your finding the spent bloom and additional buds will alert you to watch like a hawk for additional bloom.

It all started as a cup of water and some dried bread crumbs for the local doves and quail. Little did we suspect that it would become breakfast at the patio wall for birds, but it certainly has become a source of family entertainment.

After two or three broken cups, local research turned up small pyrex storage dishes that would fit on the wall and still support the weight of a thirsty bird or two. But that was just the start.

Always a Time for History

This year my BlogTalkRadio show Red River Writers Live with Peggy and Jon is featuring history. As the title indicates, history is always in season, but this year is the Civil War Sesquicentennial and the coming Centennial of our 48th state, Arizona. Arizona became a state on February 14, 1912. Both the Civil War and the western migrations of what is called the Victorian West period left painful scars on the United States and its various human groups. We are in a turbulent period now, and history if properly viewed can help us avoid some of the mistakes of the past.

Khloe Lou Gets It Right

Please allow me to introduce the newest member of our family: Miss Khloe Lou McLindsey. Khloe was born on August 8th, 2010 so she is probably unimpressed at this point that her great-grandmother has such a soft spot for veterans and first responders. Too frequently, we forget to tell these people who answer the call to serve their country and fellow citizens how very much we respect and cherish them. So let's start with firefighters. Since Mom was good enough to capture Khloe Lou's salute while wearing her favorite Fire Department cap, please accept this token of our sincere appreciation:

To those brave men and women who fight fires and brave blazing infernos to keep us safe: We Salute You.